The Sinister Silhouette by Alex Grayson releases May 25th!

CHECK OUT THE AMAZING COVER 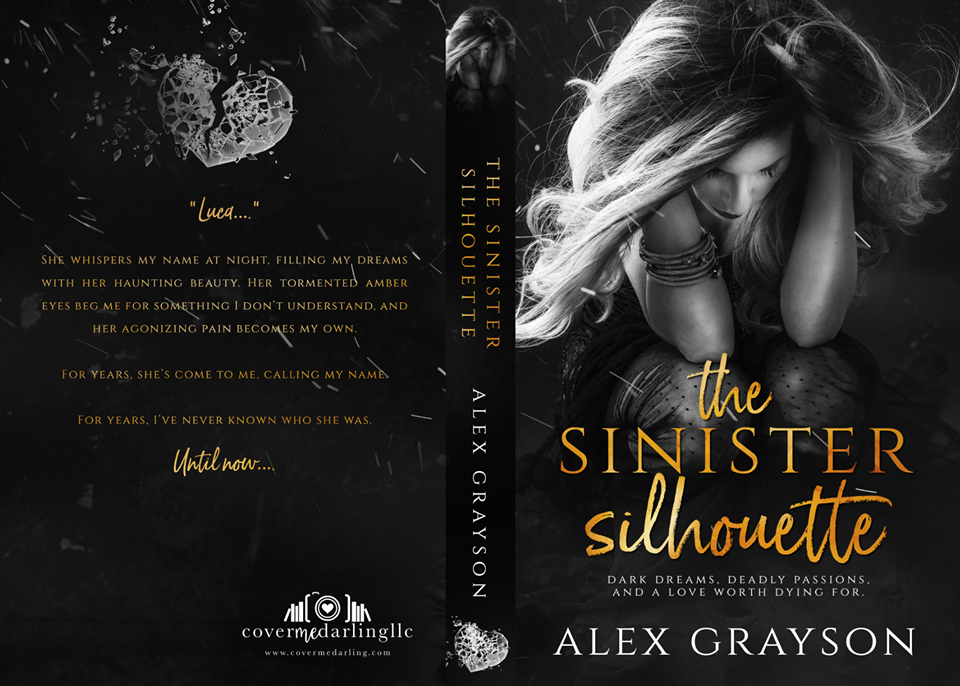 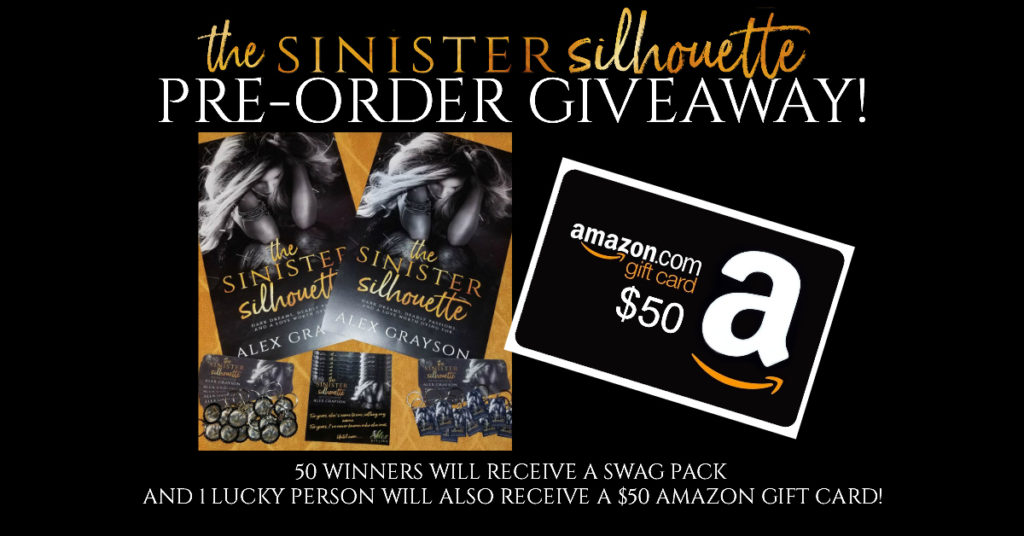 She whispers my name at night, filling my dreams with her haunting beauty.

Her tormented amber eyes beg me for something I don’t understand, and her agonizing pain becomes my own.

For years, she’s come to me, calling my name.

For years, I’ve never known who she was. 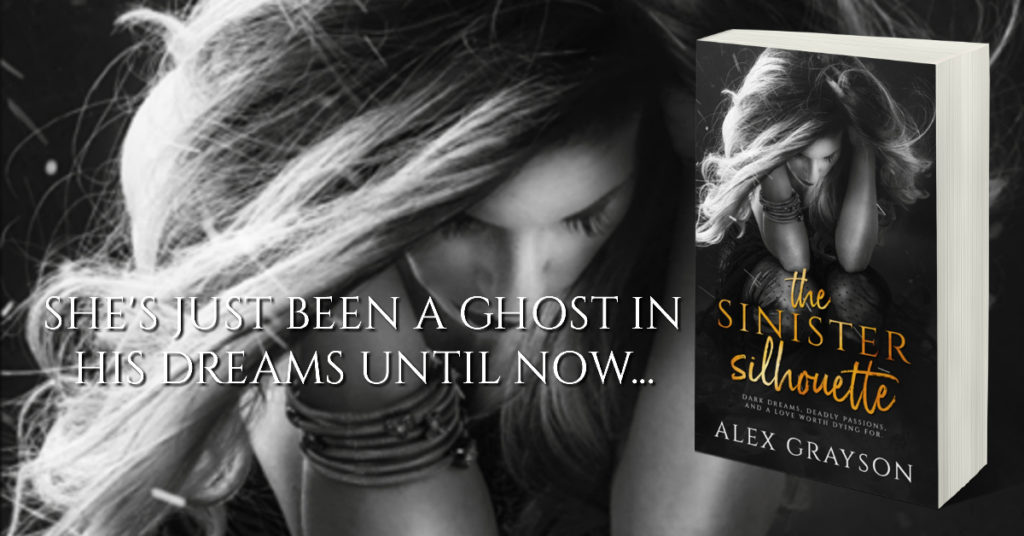 CHECK OUT THIS EXCERPT FROM THE SINISTER SILHOUETTE!!!

“LUCA….”
The willowy feminine voice comes from behind me. I slowly turn my head first, then the rest of my body and look for the source.

Blackness. Pure and absolute. That’s all I see. Except for the tiny twinkling lights. There’s a shit ton of them. It reminds me of the times I would spend the summers with my aunt and uncle out in the country. As a kid, I would always sneak out at night and lie on the roof when the sky was clear and the moon wasn’t visible. It was my favorite time of the month, because everything was so dark, except for the stars. I’d lie out there for hours and just watch them twinkle, every so often catching one that soared across the black sky.

These aren’t stars, it isn’t a moonless sky, and I don’t fucking like this. These tiny sparks of light float right in front of me, all around me, almost like glowing specks of dust.

Warm air whispers across my ear, and I spin, expecting to find someone behind me, and still see nothing but those damn flecks of light. Squinting, I try to look past them and the darkness to see something. Any fucking thing.

Frustration grows in my stomach when nothing appears.

“Who in the hell are you?” I yell, anger deepening my voice into a growl.

My ears strain as I listen closely. All I hear is my own breathing and the slight pounding in my ears from my heartbeat. The beat only gets louder with my mounting aggravation.

This time, the voice sounds rushed. It’s still whispered softly, but not the slow calling of the other two times. It’s urgent. There’s an echo too. It comes from behind me, but the echo drifts around me from every direction.

I tip my head back and snarl to the… ceiling? The sky? I have no fucking clue. “What in the hell do you want from me?”

Not expecting an answer, because I didn’t get one to my previous question, I’m surprised when the voice comes again. It’s close. So close, it almost seems like the words aren’t spoken out loud, but are just somehow in my head.

My brows slash down into a frown. There’s pain in the softly spoken words, and for some reason I don’t like the emotion coming from the voice. Something sharp pierces my chest, like a dull blade slowly being sunk into my sternum, taking my breath away. I rub the spot, not understanding why the pain is there, but knowing it’s caused by the agony in the woman’s voice.

“Where are you?” My tone is gruff from the stinging ache.

I whip around and still see nothing but the twinkling lights. I reach out, hoping that even if I can’t see anything, I can feel something. It’s so dark I can’t even see my hand in front of me, only the tiny lights floating by in a rush at my hurried movement.

One catches my eye off in the distance about fifteen feet from me, and I hone in on it. It’s slightly bigger than the rest. I take a step forward, then stop when it begins to grow. It doesn’t get brighter; the luminosity stays the same. It’s just the size that changes. Actually, it looks like the light is dimming the bigger it gets. Like it’s no longer a light, but a fog-like substance. It stretches longways, getting greater and greater. I start moving toward it, but no matter how many steps I take, the same distance stays between it and me.

Something starts to form in the white haze. I squint, not really sure what it is, because it’s almost transparent now. It’s still growing, but the bigger it gets, the more it loses its solidness.

I can barely make it out through the white haze, but it’s a woman. Her features become clearer, but the more the face forms, the more it fades as well.

I take a couple of steps forward, then jerk to a halt when I remember it does me no good.

What in the hell is this shit?

The voice whispers again, and I know it’s from the translucent vision, but the lips don’t move.

The face becomes a face and shoulders, then face, shoulders, arms, and torso. Her hair flows around her, moving slowly, like it’s floating in water.

She looks at me, and the stark pain in her eyes almost has me staggering back with the force of it.

Again, her lips don’t move, but I still hear the voice inside my head. “Come to me, Luca. I need you.”

Before I have the chance to react to her words, something happens. I tense as swarms of the nearby glowing dust infuse the white mist of the woman. Her crystalline appearance starts to solidify. Her face and the upper half of her body become more visible. Her hair, which up until that point was colorless, is a deep, rich brown. It’s long, flowing to the middle of her back. Her eyes are light brown, but not an ordinary brown. They’re an unusual golden amber. I’m not sure if it’s because of her noncorporeal appearance or if that’s their natural color, but they seem to glow.

More specks of dust penetrate the woman’s form, and the more that rushes in, the brighter she gets.

She lifts her arm, as if reaching out to me, and before it registers what I’m doing, I reach out to her.

When I take a step closer, the light surrounding her shimmers brighter. This time I’m able to shorten the gap between us. I take another step, and it seems to glisten even more. I’m tall, so when I take my next step, there’s only a few feet separating us. But the brightness is now almost too much to bear. I have to squint from the sheer brilliance of it.

There’s only inches between the tips of her fingers and mine now. The pain resting in my chest intensifies the closer I get, but it’s as if there’s a force that’s pushing me toward her. Like if I don’t, the pain would be a thousand times worse. I don’t know why, but something inside me says I must go to her.

I hold my breath as the tip of my middle finger touches the glowing tip of hers. Several things happen at once. A low growl resonates deep in the back of my throat, my fingers curl into a fist and my arm drops to my side, and the fierce pain I was experiencing in my chest turns so excruciating I’d swear my heart is spilling out onto the floor at my feet.

The trifecta of feelings happens because the instant my fingertips touch the woman, her form disintegrates. The thousands of pieces of dust that make up her form fall away into space, leaving me once again in complete blackness.

I tip my head back and an angry, pain-filled roar leaves my lips at the loss of something so important. 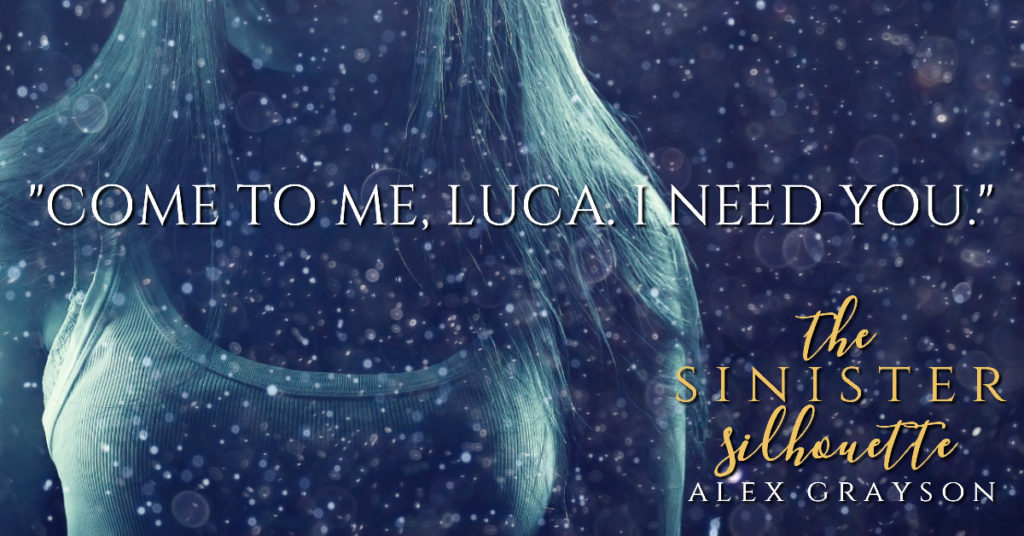 Alex Grayson is the bestselling author of heart pounding, emotionally gripping contemporary romance including The Jaded Series, The Consumed Series, and two standalone novels. Her passion for books was reignited by a gift from her sister-in-law intended to distract Alex and help her pass the time while her husband was away for work. After spending several years as a devoted reader and blogger, Alex decided to write and independently publish her first novel in 2014 (an endeavor that took a little longer than expected). The rest, as they say, is history.

Originally a southern girl, Alex now lives in Ohio with her husband, two children, two cats and dog. She loves the color blue, homemade lasagna, casually browsing real estate, and interacting with her readers. Visit her website, www.alexgraysonbooks.com, or find her on social media!